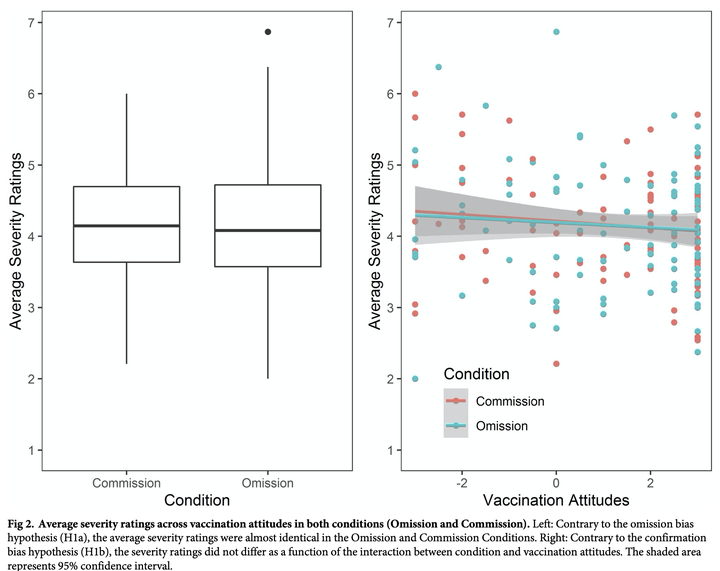 Despite the spectacular success of vaccines in preventing infectious diseases, fears about their safety and other anti-vaccination claims are widespread. To better understand how such fears and claims persist and spread, we must understand how they are perceived and recalled. One influence on the perception and recall of vaccination-related information might be universal cognitive biases acting against vaccination. An omission bias describes the tendency to perceive as worse, and recall better, bad outcomes resulting from commissions (e.g. vaccine side effects) compared to the same bad outcomes resulting from omissions (e.g. symptoms of vaccine preventable diseases). Another factor influencing the perception and recall of vaccination-related information might be people’s attitudes towards vaccines. A confirmation bias would mean that pre-existing pro-vaccination attitudes positively predict perceptions of severity and recall of symptoms of vaccine preventable diseases and negatively predict perceptions of severity and recall of vaccine side effects. To test for these hypothesized biases, 202 female participants aged 18 extendash 60 (M = 38.15, SD = 10.37) completed an online experiment with a between-subjects experimental design. Participants imagined that they had a 1-year old child who suffered from either vaccine side effects (Commission Condition) or symptoms of a vaccine-preventable disease (Omission Condition). They then rated a list of symptoms/side effects for their perceived severity on a 7-point Likert scale. Finally, they completed a surprise recall test in which they recalled the symptoms/side effects previously rated. An additional scale was used to measure their attitudes towards vaccines. Contrary to the hypotheses, perceptions of severity and the recall of symptoms/side effects were not associated with experimental condition, failing to support the omission bias, nor did they interact with attitudes towards vaccines, failing to support the confirmation bias. This cast doubt on the possibility that the spread of anti-vaccination claims can be explained by these particular universal cognitive biases.